17 Things Running Can Teach You about Yourself ... 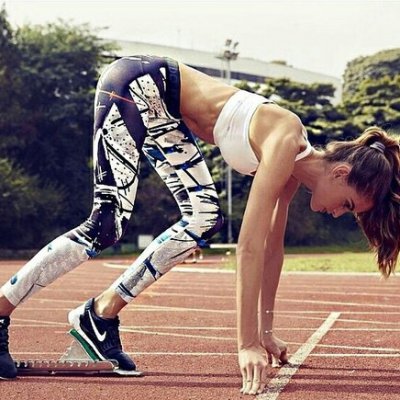 Of all the things about running that surprised me, what's most shocking is how much I've learned, and not about the sport itself, but what I've learned about me, myself. If you think you might want to give running a try, here are a few things you might learn about yourself, too.

1 The Right Pair of Shoes Really Can Change Your Life

Cinderella was right: a pair of shoes really can change your life... especially if they're running shoes. The right running shoes can help you run longer, run faster, and run without injury, so make sure you consult a pro to find exactly the right pair of running shoes for you.

2 Thigh Gaps Are so Overrated

Tina and Amy agree: thigh gaps aren't an indicator of how healthy you are, so you should not care about having one... which is great, because once you start running and building the muscles in your legs, even if you used to have one, you won't now. And that's fine.

Okay, my feet were never cute, but after several years of running, they're Walking Dead bad. And just like the lack of thigh gap, it's fine. My feet? They're powerful and strong, and who knew toenails were pretty much optional?

It's not safe to run with earbuds in, so when I need music to keep me going, I have to listen to it out loud, which means everyone can hear it... which means when I see someone coming, I hit "pause" because no one needs to know that ABBA and Jason Derulo and Icona Pop give me wings, okay?

I'm absolutely against medals and trophies just for people who participate in some event or sport... unless it's for me, in a really difficult race I've just finished. In which case, medal me up, stat! Medals are fantastic!

I'm not fast. There, I said it. But on a few rare and happy occasions, I've finished fast enough, not died as soon as I crossed the finish line, and actually won a medal. I can't describe that feeling, but I'll bet it's exactly how they feel at the Olympics, right?

There are so many worse things I could be addicted to, right? So my minor running addiction* isn't so bad, right? Right?

When you're training for a half or full marathon, you're hungry ALL. THE. TIME. The thing is, you're not hungry for junk food, you're hungry for GOOD food, so running sort of forces you into a healthful diet. But...

... sadly, you're probably not going to lose weight, though you will almost certainly build lean muscle and gain a healthy heart. So who cares about a number on a scale when you're stronger and healthier than you've ever been?

10 Yoga Makes so Much Sense Now

Suddenly, you'll be desperate to stretch parts of your body you didn't even know could be stretched, and that's when yoga makes total sense. Try it. You'll be so glad you did!

I'm sure you've wondered why there are so many port-o-potties at races. Well, brace yourself: they're there because running will make you poop. This new healthful diet and regular exercise will make you, well, regular. You'll go at about the same time every day, probably in the morning, and since so many races start in the morning...

Whether you're wanting to do a 5k or an ultra-marathon (because, you know, the torture of a regular marathon just isn't enough for some people), your training will matter, and you can't cheat. CANNOT. You will pay the price on race day.

13 You're a Total Competitive Jerk

I swear I'm a nice person, except on race day. Then I turn into a total competitive jerk. I don't mean to, but I can't help it - I want to win! Or at least pass that girl with the perfect ponytail and adorable socks (GAWD she's not even sweating!)...

14 There's Another World out There

The world of running will suck you in! It has its own rules, nutrition, food, hydration, magazines, celebrities, fashion, and more. Truly, it's a whole other world!

15 Travel Will Never Be the Same

I have a goal of running a race in every state (and the District of Columbia), which means everywhere I go, I have to see if there's a race there. Vacations almost always have to include a race of some sort, or at least a run in the mornings... which means I need to pack my running stuff. A LOT of running stuff, most of which I won't use, but still!

17 You Can do Anything

You're Wonder Woman! You can do anything! When I first started running, I couldn't go a 1/4 mile without stopping, and now I'm training for my first full marathon. Our bodies are amazing and strong and capable - we can do anything!

*Like all other addictions, a running addiction is a serious health issue and should be taken seriously, so if you think you might have a problem, please seek professional help immediately.