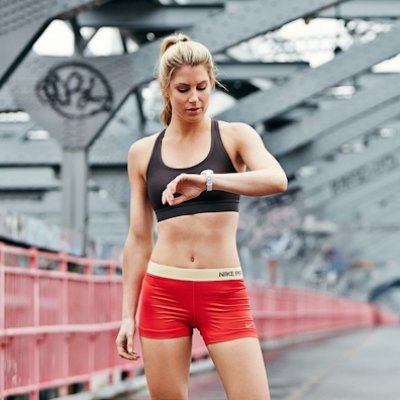 It never fails, really… I lace up my trainers, head out the door, and my inner daydreamer/competitor comes out. If you’re a runner, chances are, you’ll recognize yourself somewhere in this list, too — these are thoughts I’ve had while running, in most cases more than once. They’re all probably very telling, but I take solace in knowing while I might be a little crazy, at least I’m not alone. Here are some random thoughts all runners have had at some point (perhaps on this morning’s run).

I’ve had this one during every 5k I’ve ever run — if I go just a little faster, push myself just a little harder, I can beat my personal record, maybe even come in first! People will cheer as I cross the finish line, and hoist me onto their shoulders for an impromptu parade! It is wildly improbable at best, but you’re not a true runner til you’ve had this vision, at least once.

It ought to be against the law to place comfy-looking benches along running paths. I’m sure the civil engineers who put them there mean well, but really, they’re just temptations, aren’t they? They beckon you to stop, sit, and be lazy, when you’ve still got many miserable, sweaty miles to go.

These thoughts are endless, and in my imagination, tend toward the macabre – what if I found a body on the jogging trail? It happens ALL. THE. TIME in TV shows.

4. Is This My Superpower?

Have you ever felt that elusive runner’s high, and felt like you could run forever? That perhaps, like The Flash, super-speed might be your secret superpower? I have… for about two glorious miles… then it’s back to reality for me.

Artist Matthew Inman calls this inner voice “The Blerch,” and illustrates self-doubt and slackerdom as a feisty cherub bent on a complete couch-potato lifestyle. Every time I head out the door, though, that Blerch is silenced, because action is the best cure for apathy and lassitude.

I loathe the treadmill with the white-hot passion of a thousand suns. It’s boring, it’s tedious, and in February in Michigan, it’s necessary — it’s just too cold to run outside. But put me on a treadmill at the gym, and one thing becomes instantly clear: it’s a race with the person next to me, no matter how oblivious they are to the competition.

7. Do I Look Ridiculous?

The answer is almost certainly a resounding YES! But I run anyway. In my mind, I’m a gorgeous leggy supermodel running gracefully along. But in reality, I’m sure I flail, my nose and cheeks are red, and on distance days, my face is covered in sweat and salt. My running clothes don’t match, and I have a typical thick-legged runner’s body, which is not meant to look good in leggings or shorts. I look ridiculous – and I really don’t care (and neither should you, fellow runner).

How many of these thoughts have popped into your head while running? Or is there another odd daydream you’ve had? Do tell – I have to know!